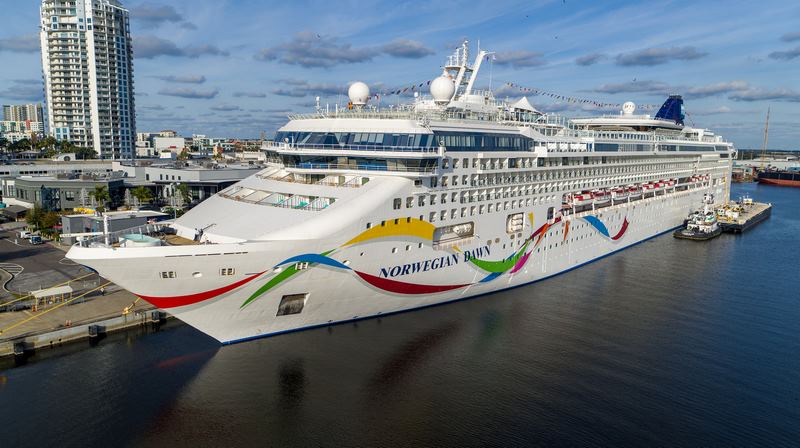 Royal Caribbean and Norwegian Cruise Line each have a ship completing its 20th year of service this month.

Royal Caribbean’s Voyager Class Navigator of the Seas was the world’s largest cruise ship when she departed on her maiden voyage on December 14, 2002.

She debuted in the Caribbean and offered week-long cruises from Miami. She sailed Eastern and Western Caribbean voyages and visited destinations like St. Thomas, Grand Cayman, Cozumel, and San Juan. She also called on Royal Caribbean’s private island in Haiti, Labadee.

Navigator of the Seas debuted in Europe in 2007 sailing from Southampton, England. She offered itineraries in Northern and Western Europe before she sailed to other destinations over the years

She was dry-docked and modernized in 2019. She received a resort-style Caribbean pool deck, the three-level signature bar The Lime & Coconut, and the first blow-dry bar To Dry For. The Royal Promenade, one of the ship’s most iconic features, was also reimagined.

Navigator of the Seas now sails a variety of itineraries from Los Angeles, California to Catalina Island and destinations in Mexico.

The Norwegian Dawn is also completing 20 years of service this month. She was christened in New York City on December 16, 2002.

She departed on her maiden voyage from Miami a few days later. It was a seven-night cruise in the Western Caribbean.

Norwegian Dawn is one of Norwegian’s first Freestyle Cruising ships and carries up to 2,200 guests. She also introduced hull art which is a feature you will now find throughout Norwegian’s fleet of ships.

She underwent a major modernization in 2016 and received Los Lobos Cantina and the Sugarcane Mojito Bar, along with updated public rooms and staterooms. She also received a complete overall of the Garden Villas.

Norwegian Dawn is currently offering Caribbean cruises from Tampa before she spends the summer in Northern Europe. She will then sail into Asia for the 2023-2024 winter season.