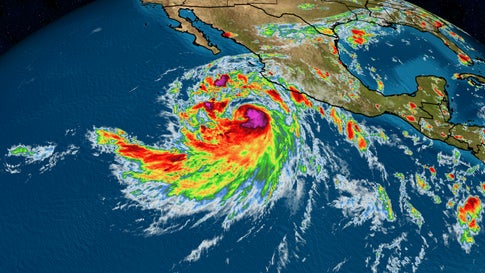 Hurricane Kay could impact cruises visiting the port of Cabo San Lucas toward the end of the week. The storm continues to strengthen as it moves northwest along the Mexico coastline. The Mexican government has issued a tropical storm watch which includes the Cabo San Lucas cruise port. If the storm intensifies, these watches could be upgraded to warnings which would impact port operations.

Over the weekend, Hurricane Kay damaged houses, brought down trees, and caused rivers to overflow in Guerrero, Mexico and in the port of Acapulco.

Currently, the port is operating as normal, but there are no ships in port during the early part of the week. The storm is expected to continue to strengthen and move closer to the peninsula. If this happens, Cabo San Lucas will be on the east side of the path of the storm, which is the stronger side of the storm.

Two cruise ships may be impacted by the hurricane. Carnival’s Panorama is scheduled to be in Cabo San Lucas on Thursday, September 8, just as the storm is drawing closer to the Baja Peninsula. Royal Caribbean’s Navigator of the Seas was set to visit Cabo San Lucas on Friday, September 9, but this is when the weather could be the worst.

No changes have been confirmed, but decisions are made based on updated information as to the storm’s strength, wind field size, relative motion, and overall speed. All cruise lines monitor weather conditions in their sailing areas and safety is their number one consideration.

How about you? Have you ever had a port diverted or a cruise canceled due to a hurricane?