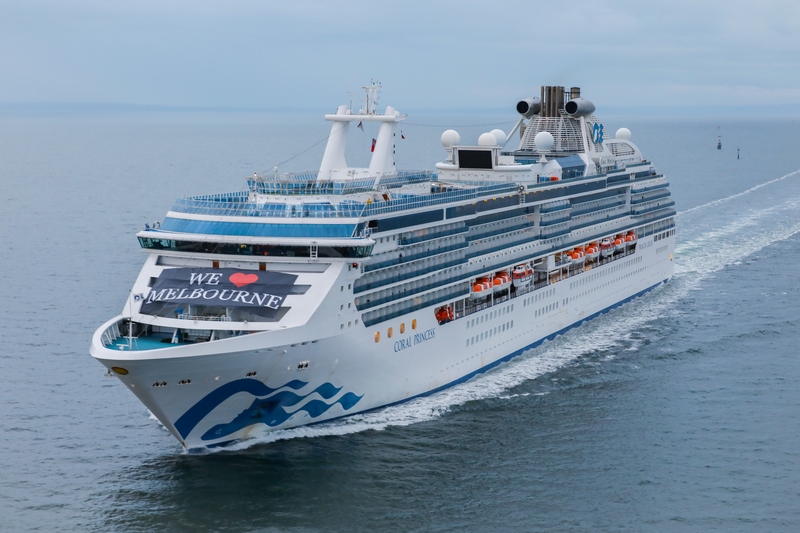 Finally…cruising has returned to Melbourne!

The Coral Princess became the first cruise ship in over two and a half years to arrive in Melbourne. It arrived about 7:30 Thursday morning with a huge “We love Melbourne” banner on its bow and more than 2500 passengers ready to disembark.

The ship, which had sat dormant while the cruise industry was shut down, arrived to a drizzly Melbourne morning but that didn’t stop the fanfare. The welcoming committee included samba dancers and a boatload of fresh produce.

The Coral Princess is currently on a six-day voyage from Sydney along the coast of South East Australia. After leaving Melbourne, she will sail to Adelaide, which also marks the return of cruising to South Australia.

Minister for Tourism, Sport and Major Events Steve Dimopoulos said, “Today marks an important milestone for the state’s tourism and recovery efforts. It’s fantastic to see cruise ships back on our shores with passengers from all over the globe.” He called the arrival “an iconic moment” for the state and a boon for the tourism economy which contributed more than $353 million to the state’s pre-pandemic economy. “There is no bigger way to arrive and disembark thousands of people in one shot than a cruise ship. 2000 people are coming to the streets in Melbourne this morning,” he said.

Deputy Lord Mayor Nicholas Reece called the arrival of the Coral Princess a “momentous” moment for the city. “This is a day when we can say we are turning the page and seeing our city and our lives get back to something like what we knew before COVID came along,” he said. Reece said he felt like this was a historic moment and Melbourne was “back in business.” He also addressed the economic impact that tourists bring to Melbourne.

The Victorian government eased restrictions on cruise ships arriving in the city earlier this year. Cruisers are required to be double vaccinated, must be tested before embarking and wear face masks when they are out of their cabins or not on an open deck. Anyone who tests positive while onboard will be isolated in their cabin.

How about you? Is Melbourne a cruise destination for you?

Comments are closed, but trackbacks and pingbacks are open.